Don’t think you’ve got to squid fish at night. In the winter months squid can be found throughout the Puget Sound even during daylight hours

In the winter, when the fishing slows down in the lakes I’ll hit the Puget Sound for a change in scenery. Shilshole Marina in Ballard is right in my backyard but the Puget Sound has numerous locations with easy launches and little boat ramp traffic this time of year. Even know salmon fishing is closed, there’s always something out there to catch. I’ll drag along a handful of squid jigs, white candlefish jigs and even a drop-shot set up for surf perch.

Whether you’re in your boat or in a kayak, pay close attention to your fish finder for bait and squid. Herring will be more solid and compact while squid will look more pixelated on your screen. Depending on the current, depth and wave/wind speed, will determine how much weight you’ll need to add to your set up. I like using a 2 to 3 oz white Candlefish bar jig with a pinched single barb or a 2 to 3 oz cannonball weight with one or two squid jigs tied inline above the weight. Drop it right down to the bottom working a rhythmic slow jig up and down. Squid will attack your jig if they are down there. You’ll also pick up a variety of other bottom fish including sand dabs, rockfish and even black mouth salmon. Rockfish and black mouth are not fish you can retain or legally target, so I’ll move on so not to disturb them if the squid are not there.

Squid can be found throughout the day in various depths from 25 to 80 feet of water – and even deeper. When you find them you can typically catch quite a few. Just stay on top of that school. I have a pedal powered Hobie Fishing Kayak that I can hold position pretty well working against the current on a calm day.
If I’m not having any luck, I’ll switch over to lighter gear and look for surf perch near the jetties. These fish can be around jetties and piers chopping on little worms, mussels, etc. A light weight bass rod and a drop-shot set up and small hook tipped with a clam neck, piece of squid or even a Gulp sand worm will produce fish. These fish are beautiful and put up a great fight. I’m told they are delicious to eat, but I have no problem releasing them. Did you know surf perch don’t lay eggs, they birth their young. (Fast forward to 7:54 for squid fishing part below) 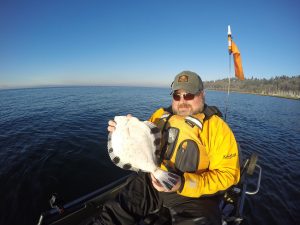 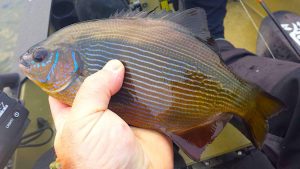 Listen to the interview I did with ESPN Radio’s The Outdoor Line talking about Squid Fishing by Kayak in the Puget Sound.